Did you know that mushrooms have no chlorophyll, so they don’t need sunshine to grow and thrive? As a fungus, the mushroom lacks ability to use energy from the sun. Instead, it extracts carbohydrates and proteins from decaying, organic matter. Here’s an old Igbo proverb for you: “If you wish to eat a mushroom, you cannot consider what the mushroom fed on”.

France is credited with setting up the earliest commercial mushroom farms during the reign of Louis XIV. Special caves were set up around Paris specifically for growing mushrooms. Long before King Louis, however, ancient Egyptians believed mushrooms to be the plant of immortality. Throughout the ages and around the world, mushrooms were believed to have supernatural powers, and many cultures incorporated mushroom rituals into their religious rites. 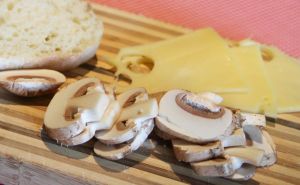 Read more mushroom history, learn about different varieties, and get some really great recipe ideas from the Mushroom Council. By the way, NEVER, EVER eat any found mushrooms without the guidance of an expert.

Or, try my super simple, satisfying recipe for Champignon Toast.  Not sure you’ll gain any super-human powers, but I’m pretty sure you’ll enjoy it. 🙂

Let your kids in on some mushroom fun, and have them join the University of Michigan’s Mushroom Club. This old-school site offers mushroom games, puzzles and experiments, just right for little ones.

It’s possible to spend hours on the internet researching mushroom lore and logistics, so I’ll leave you with this one fascinating tidbit I just learned about: the largest living organism ever found is a honey mushroom. It covers 3.4 square miles of land in the Blue Mountains of eastern Oregon, and it’s still growing!

One final request: I’ve been searching for a photo of the 4,600-year old Egyptian mushroom hieroglyphs. If anyone knows where to locate this, please give me a shout.